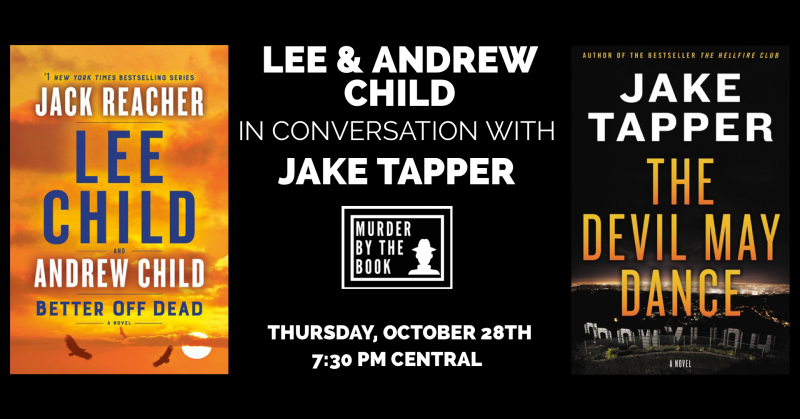 Signed copies of Better off Dead available for preorder!

This is a ticketed event, however it couldn't be easier to get a ticket - just purchase a copy of Better off Dead from Murder By The Book!

If you've purchased a copy of Better off Dead from us, you will be emailed details on how to participate in the event.

Lee Child is the author of twenty-five New York Times bestselling Jack Reacher thrillers, with sixteen having reached the #1 position, and the #1 bestselling complete Jack Reacher story collection, No Middle Name. Foreign rights in the Reacher series have sold in one hundred territories. A native of England and a former television director, Lee Child lives in New York City and Wyoming.

Andrew Child, who also writes as Andrew Grant, is the author of RUN, False Positive, False Friend, False Witness, Invisible, and Too Close to Home. Child and his wife, the novelist Tasha Alexander, live on a wildlife preserve in Wyoming. He is the co-author of the #1 bestselling Jack Reacher novel The Sentinel.

Jake Tapper is the author of The Hellfire Club, which is being turned into a TV series, and The Outpost, which became a celebrated film released in 2020. An award-winning anchor for CNN, he joined the network in January 2013. He lives in Washington, D.C., with his wife, daughter, and son.

Digging graves had not been part of my plans when I woke up that morning.

The Devil May Dance: A Novel (Charlie and Margaret Marder Mystery #2) (Hardcover)

Charlie and Margaret discover the dark side of Hollywood in Jake Tapper's follow-up to New York Times bestseller The Hellfire Club—an "excellent" cocktail of corruption and ambition (Publishers Weekly).

Charlie and Margaret Marder, political stars in 1960s Washington DC, know all too well how the tangled web of power in the na