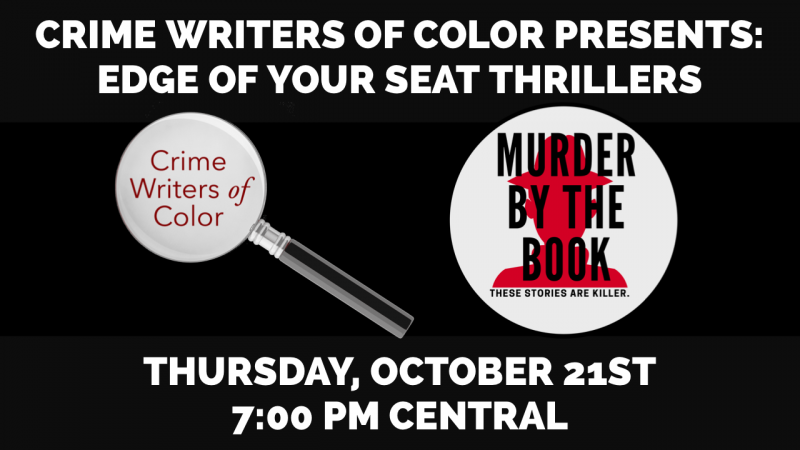 Crime Writers of Color is an informal group of over 300 self-identified crime writers of color, founded by Walter Mosley, Gigi Pandian, and Kellye Garrett in 2018. Learn more at www.crimewritersofcolor.com.

Kellye Garrett is the acclaimed author of the upcoming Like A Sister (Mulholland Books) suspense novel in which no one bats an eye when a disgraced reality TV star is found dead in the Bronx—except her estranged half-sister, whose refusal to believe the official story leads her on an increasingly dangerous search for the truth.

She’s also the author of the Detective by Day mysteries about a semi-famous, mega-broke black actress who takes on the deadliest role of her life: Private Detective. The first, Hollywood Homicide, won the Agatha, Anthony, Lefty and Independent Publisher “IPPY” awards for best first novel and was named one of BookBub’s Top 100 Crime Novels of All Time. The second, Hollywood Ending, was featured on the TODAY show’s Best Summer Reads of 2019 and was nominated for both Anthony and Lefty awards. Prior to writing novels, Kellye spent eight years working in Hollywood, including a stint writing for Cold Case. She currently serves on the Board of Directors for Sisters in Crime and is a co-founder of Crime Writers of Color. Learn more at KellyeGarrett.com.

Hailing from Northern Virginia, Yasmin Angoe is a first-generation Ghanaian American who grew up in two cultural worlds. She taught English in middle and high schools for years, served as an instructional coach for virtual teachers, and spent time as a freelance copy editor.

Angoe recently received the Eleanor Taylor Bland Award for emerging writers of color from Sisters of Crime, of which she's a proud member. When she's not writing, she's in South Carolina with her beautiful blended family, trying new recipes and absorbed in an audiobook. Her Name Is Knight is Yasmin's debut novel.

Rachel Howzell Hall is the author of the Los Angeles Times Book Prize- and Lefty Award-nominated And Now She's Gone; and the Anthony Award-, Lefty Award-, and International Thriller Writers Award-nominated They All Fall Down. She also writes the acclaimed Detective Elouise Norton series, including Land of Shadows, Skies of Ash, Trail of Echoes, and City of Saviors. Rachel is also the coauthor of The Good Sister with James Patterson, which was included in the New York Times bestseller The Family Lawyer. She lives in Los Angeles. You can find her at www.rachelhowzell.com and on Twitter @RachelHowzell.

Silvia Moreno-Garcia is the New York Times bestselling author of the critically acclaimed speculative novels Mexican Gothic, Gods of Jade and Shadow, Signal to Noise, Certain Dark Things, and The Beautiful Ones, as well as the crime novel Untamed Shore. She has edited several anthologies, including the World Fantasy Award-winning She Walks in Shadows (aka Cthulhu's Daughters). She lives in Vancouver, British Columbia.

E.A. Barres' most recent thriller, The Unrepentant, was published in 2019 by Down and Out Books (written under E. A. Aymar). His other thrillers include the anthologies The Swamp Killers (March 2020) and The Night of the Flood (March 2018); in both anthologies, he served as co-editor and contributor. His column, Decisions and Revisions, appears monthly in the Washington Independent Review of Books, and he is also the Managing Editor of The Thrill Begins, ITW's online resource for aspiring and debut thriller writers; he also serves on the Board of ITW as the Vice President of Author Programs. In addition to ITW, he is a member of the Mystery Writers of America, Crime Writers of Color, and SinC. Barres also runs the Noir at the Bar series for Washington, D.C. He was born in Panama and now lives and writes in the D.C./MD/VA triangle.

Naomi Hirahara is the Edgar Award-winning author of the Mas Arai mystery series, including Summer of the Big Bachi, which was a Publishers Weekly Best Book of the Year and one of Chicago Tribune's Ten Best Mysteries and Thrillers; Gasa Gasa Girl; Snakeskin Shamisen; and Hiroshima Boy. She is also the author of the LA-based Ellie Rush mysteries. A former editor of The Rafu Shimpo newspaper, she has co-written non-fiction books like Life after Manzanar and the award-winning Terminal Island: Lost Communities of Los Angeles Harbor. The Stanford University alumna was born and raised in Altadena, CA; she now resides in the adjacent town of Pasadena, CA.

A Detroit native, CHERYL A. HEAD now lives on Capitol Hill in Washington, DC. Her novels Long Way Home: A World War II Nov and Catch Me When I'm Falling were Next Generation Indie Book Award finalists. Bury Me When I'm Dead was a 2017 Lambda Literary Award finalist and included in the Detroit Public Library's African American Booklist. Her novel Judge Me When I'm was the recipient of the Ann Bannon Award from the Golden Crown Literary Society. In 2019, Head was inducted into the Saints & Sinners Literary Hall of Fame. She also serves on the board of directors of Bouchercon.

Her Name Is Knight (Hardcover)

Her Name Is Knight (Paperback)

These Toxic Things: A Thriller (Hardcover)

These Toxic Things: A Thriller (Paperback)

Velvet Was the Night (Hardcover)

GOOD MORNING AMERICA BUZZ PICK • From the New York Times bestselling author of Mexican Gothic comes a simmering historical noir about a daydreaming secretary, a lonesome enforcer, and the mystery of the missing woman they’re both desperate to find.

They're Gone: A Novel (Hardcover)

Two women's husbands are murdered on the same night in the same way--and their investigation uncovers a terrifying connection.

They never expected her to fight back...

Warn Me When It's Time (Charlie Mack Motown Mystery #6) (Paperback)

A hate group operating in Oakland County, Michigan has claimed responsibility for a six-month-long string of arson fires and robberies at mosques, temples, and black churches around Detroit, eluding police and federal agencies. The most recent fire, at a mosque in Dearborn, kills a respected imam.

In this "tense, twisting mystery" (Megan Miranda), no one bats an eye when a Black reality TV star is found dead—except her estranged half-sister, whose refusal to believe the official story leads her on a dangerous search for the truth.

“I found out my sister was back in New York from Instagram.