CWoC Presents A Look Back at 2021 - Virtual Event 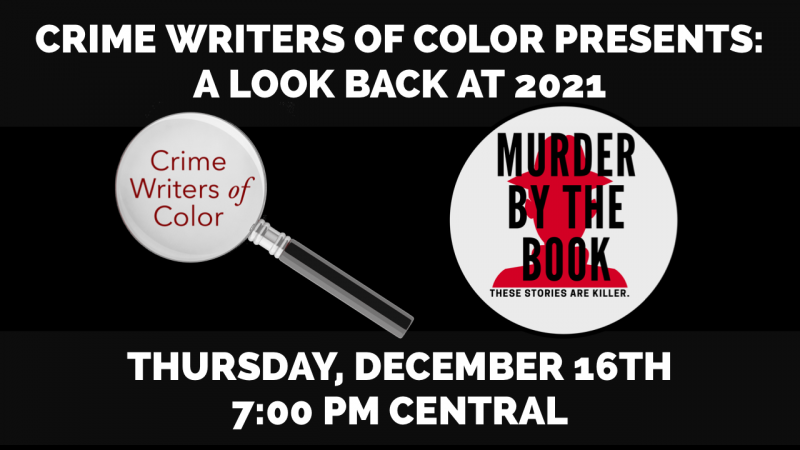 Crime Writers of Color is an informal group of over 300 self-identified crime writers of color, founded by Walter Mosley, Gigi Pandian, and Kellye Garrett in 2018. Learn more at www.crimewritersofcolor.com.

Kellye Garrett is the acclaimed author of the upcoming Like A Sister (Mulholland Books) suspense novel in which no one bats an eye when a disgraced reality TV star is found dead in the Bronx—except her estranged half-sister, whose refusal to believe the official story leads her on an increasingly dangerous search for the truth.

She’s also the author of the Detective by Day mysteries about a semi-famous, mega-broke black actress who takes on the deadliest role of her life: Private Detective. The first, Hollywood Homicide, won the Agatha, Anthony, Lefty and Independent Publisher “IPPY” awards for best first novel and was named one of BookBub’s Top 100 Crime Novels of All Time. The second, Hollywood Ending, was featured on the TODAY show’s Best Summer Reads of 2019 and was nominated for both Anthony and Lefty awards. Prior to writing novels, Kellye spent eight years working in Hollywood, including a stint writing for Cold Case. She currently serves on the Board of Directors for Sisters in Crime and is a co-founder of Crime Writers of Color. Learn more at KellyeGarrett.com.

Cate Holahan is the USA Today bestselling author of domestic suspense novels The Widower's Wife, One Little Secret, Lies She Told, and Dark Turns. In a former life, she was an award-winning journalist, writing for The Record, The Boston Globe, and BusinessWeek, among others. She was also the lead singer of Leaving Kinzley, an original rock band in NYC.

She lives in NJ with her husband, two daughters, and food-obsessed dog, and spends a disturbing amount of time highly-caffeinated, mining her own anxieties for material.

Robert Justice is a Denver native. His first novel, They Can't Take Your Name, was named a runner-up for the 2020 Sisters in Crime Eleanor Taylor Bland Award. He believes that together we can right wrongful convictions.

Mia P. Manansala is a writer from Chicago who loves books, baking, and bad-ass women. She uses humor (and murder) to explore aspects of the Filipino diaspora, queerness, and her millennial love for pop culture.

Sujata Massey was born in England to parents from India and Germany, grew up in St. Paul, Minnesota, and lives in Baltimore, Maryland. She was a features reporter for the Baltimore Evening Sun before becoming a full-time novelist. The first Perveen Mistry novel, The Widows of Malabar Hill, was an international bestseller and won the Agatha, Macavity, and Mary Higgins Clark Awards. Visit her website at sujatamassey.com.

She is the winner of the 2018 Hugh Holton Award, the 2018 Eleanor Taylor Bland Crime Fiction Writers of Color Award, the 2017 William F. Deeck - Malice Domestic Grant for Unpublished Writers, and the 2016 Mystery Writers of America/Helen McCloy Scholarship. She's also a 2017 Pitch Wars alum and 2018-2019 mentor.

K.D. Richards is a native of the Washington, DC area who now lives outside of Toronto with her husband and two sons. You can find her at kdrichardsbooks.com.

Marla Bradeen writes mysteries both as herself and as Paige Sleuth. A former software consultant and analyst, she gave up her day job in 2012 and now enjoys killing off imaginary people with lives more interesting than hers. When she’s not plotting murder, she spends her time catering to the demands of her two rescue cats. Find her here: http://www.marlabradeen.com

Gaslight goes high-tech in USA Today bestselling author Cate Holahan's new standalone thriller in which a family must determine who the real enemy is after a brutal home invasion breaks their trust in each other.
Her public life Jade Thompson has it all.

In this "crackling domestic suspense" filled with "wry humor and deft pacing" (Alyssa Cole), no one bats an eye when a Black reality TV star is found dead—except her estranged half-sister, whose refusal to believe the official story leads her on a dangerous search for the truth.

“A mystery that has everything I love most: an intrigui

They Can't Take Your Name: A Novel (Hardcover)

Laced with atmospheric poetry and literature and set in the heart of Denver's black community, this gripping crime novel pits three characters in a race against time to thwart a gross miscarriage of justice—and a crooked detective who wreaks havoc…with deadly consequences.

Death at a beauty pageant turns Tita Rosie's Kitchen upside down in the latest entry of this witty and humorous cozy mystery series by Mia P. Manansala.

The first book in a new culinary cozy series full of sharp humor and delectable dishes—one that might just be killer....

Bombay’s first female lawyer, Perveen Mistry, is compelled to bring justice to the family of a murdered female Parsi student just as Bombay’s streets erupt in riots to protest British colonial rule. Sujata Massey is back with this third installment to the Agatha and Mary Higgins Clark Award-winning series set in 1920s Bombay.

A mysterious fire is set at Christmas...

Midnight Hour: A chilling anthology of crime fiction from 20 authors of color (Paperback)

From a simple robbery gone horribly wrong to a grisly murder in a secret love dungeon, this stellar collection of crime fiction short stories showcases some of today's finest voices of color.