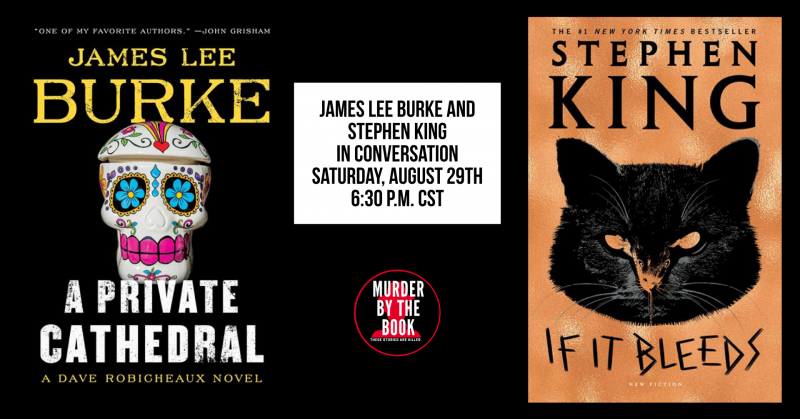 James Lee Burke is a New York Times bestselling author, two-time winner of the Edgar Award, and the recipient of the Guggenheim Fellowship for Creative Arts in Fiction. He's authored thirty-eight novels and two short story collections. He lives in Missoula, Montana.

Stephen King is the author of more than sixty books, all of them worldwide bestsellers. His recent work includes If It Bleeds, The Institute, Elevation, The Outsider, Sleeping Beauties (cowritten with his son Owen King), and the Bill Hodges trilogy: End of Watch, Finders Keepers, and Mr. Mercedes (an Edgar Award winner for Best Novel and an AT&T Audience Network original television series). His novel 11/22/63 was named a top ten book of 2011 by The New York Times Book Review and won the Los Angeles Times Book Prize for Mystery/Thriller. His epic works The Dark Tower, It, Pet Sematary, and Doctor Sleep are the basis for major motion pictures, with It now the highest grossing horror film of all time. He is the recipient of the 2018 PEN America Literary Service Award, the 2014 National Medal of Arts, and the 2003 National Book Foundation Medal for Distinguished Contribution to American Letters. He lives in Bangor, Maine, with his wife, novelist Tabitha King.

This LIVE will be found on our YOUTUBE CHANNEL.

Have questions for the authors? Please submit any questions via this GOOGLE FORM.

After finding himself caught up in one of Louisiana’s oldest and bloodiest family rivalries, Detective Dave Robicheaux must battle the most terrifying adversary he has ever encountered: a time-traveling superhuman assassin.

The Shondell and Balangie families are longtime enemies in the New Iberia criminal underworld and show each other no mercy.

House of the Rising Sun: A Novel (A Holland Family Novel) (Paperback)

Bestselling author James Lee Burke’s “stunning” (Publishers Weekly, starred review) masterpiece is the story of a father and son separated by war, circumstance, and a race for the Holy Grail—a thrilling entry in the Holland family saga.

New Orleans Detective Dave Robicheaux has fought too many battles: in Vietnam, with police brass, with killers and hustlers, and the bottle.

If It Bleeds (Hardcover)

From #1 New York Times bestselling author, legendary storyteller, and master of short fiction Stephen King comes an extraordinary collection of four new and compelling novellas—Mr. Harrigan’s Phone, The Life of Chuck, Rat, and the title story If It Bleeds—each pulling you into intriguing and frightening places.

The Institute: A Novel (Paperback)

From #1 New York Times bestselling author Stephen King, the most riveting and unforgettable story of kids confronting evil since It. “This is King at his best” (The St.