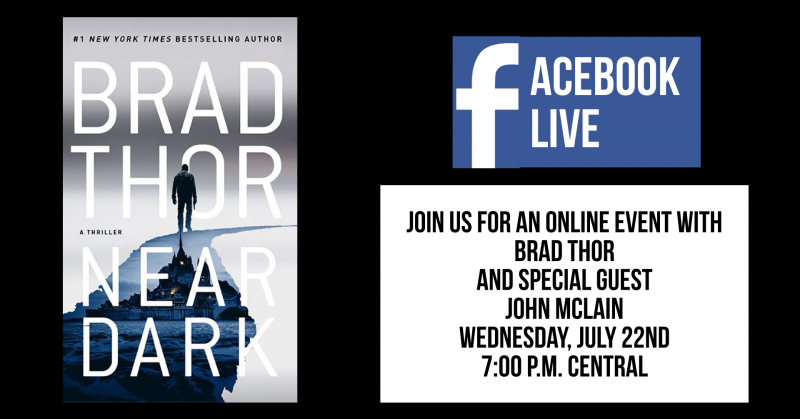 Brad Thor is the #1 New York Times bestselling author of twenty thrillers, including Near Dark, Backlash (one of Suspense Magazine's Best Books of the Year), Spymaster (declared by The Washington Times as "one of the all-time best thriller novels"), The Last Patriot (nominated best thriller of the year by the International Thriller Writers Association), Blowback (one of the "Top 100 Killer Thrillers of All Time" by NPR), and The Lions of Lucerne. Visit his website at BradThor.com to learn more.

Houston Chronicle sportswriter John McClain will be Brad's guest interviewer. McClain began his career writing for the Waco Tribune Herald from 1973-76 before moving to the Chronicle. During his career, he has covered the Houston Oilers until their move to Tennessee, the Houston Texans, and the Houston Aeros from the World Hockey Association. He is currently a member of the Pro Football Hall of Fame Selection Committee, the Pro Football Hall of Fame Seniors Committee, and the Texas Sports Hall of Fame Selection Committee. He also appears on Sports Radio 610. In 2015, he was named as a Gridiron Legend.

Near Dark: A Thriller (The Scot Harvath Series #19) (Hardcover)

The Lions of Lucerne (The Scot Harvath Series #1) (Paperback)

In his daring and chilling first novel, #1 New York Times bestselling author Brad Thor draws us into a sinister labyrinth of political intrigue and international terrorism, serving up an explosive cocktail of unrelenting action as one man is pushed to the edge.

On the snow-covered slopes of Utah, the President of the United States has been kidnapped and his Secret Service deta

Path of the Assassin: A Thriller (The Scot Harvath Series #2) (Paperback)

The #1 New York Times bestselling author of the Scot Harvath series and “heir to Tom Clancy and Robert Ludlum” (Chicago Tribune) returns with this unputdownable, white-knuckled thriller following the Secret Service agent as he’s on the trail of the world’s most ruthless terrorist.

State of the Union: A Thriller (The Scot Harvath Series #3) (Paperback)