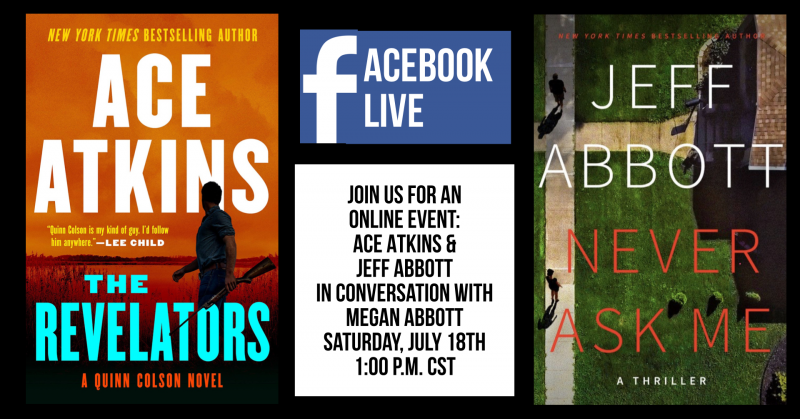 Ace Atkins is the author of twenty-three books, including eight Quinn Colson novels, the first two of which, The Ranger and The Lost Ones, were nominated for the Edgar Award for Best Novel (he has a third Edgar nomination for his short story "Last Fair Deal Gone Down"). He is the author of seven New York Times-bestselling novels in the continuation of Robert B. Parker's Spenser series. Before turning to fiction, he was a correspondent for the St. Petersburg Times and a crime reporter for the Tampa Tribune, and he played defensive end for Auburn University football.

Jeff Abbott is the New York Times bestselling author of eighteen novels. He is the winner of an International Thriller Writers Award (for the Sam Capra thriller The Last Minute) and is a three-time nominee for the Edgar Award. He lives in Austin with his family.

Megan Abbott is the award-winning author of nine novels, including You Will Know Me, The Fever, Dare Me, and The End of Everything. She received her PhD in literature from New York University. Her writing has appeared in the New York Times, the Wall Street Journal, the Los Angeles Times Magazine, The Guardian, and The Believer. She lives in New York City.

In this gripping new crime novel from the New York Times-bestselling author, Quinn Colson returns to take down a criminal syndicate that has ravaged his community, threatened his family, and tried to have him killed.

In the latest thriller featuring the legendary Boston PI, Spenser heads to the City of Angels to meet old friends and new enemies in a baffling missing person case that might shake Tinseltown to its core.

Each of us has a question we dread. When the simple community of Lakehaven is shaken by a violent crime, doubts begin to arise among the locals about whom they can trust.

From New York Times bestselling writer Jeff Abbott, a psychologically intense and emotionally gripping new suspense novel about a daughter's desperate search for her missing mother-one that may lead her closer to home than she ever anticipated.

My mom would never leave me.

Dare Me: A Novel (Paperback)

From the award-winning author of The Turnout and Give Me Your Hand: the searing novel of friendship and betrayal that inspired the USA Network series, praised by Gillian Flynn as "Lord of the Flies set in a high-school cheerleading squad...Tense, dark, and beautifully written."  Addy Hanlon has always been Beth Cassidy's best friend and trusted l

Give Me Your Hand (Paperback)

A life-changing secret destroys an unlikely friendship in this "magnetic" psychological thriller from the Edgar Award-winning author of Dare Me and The Turnout (Meg Wolitzer).

You told each other everything.