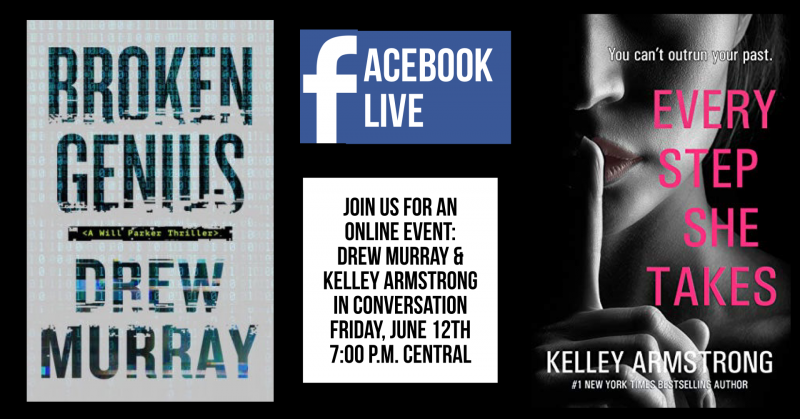 Kelley Armstrong is the author of the Rockton thriller series, standalone thrillers beginning with Wherever She Goes, and the Royal Guide to Monster Slaying middle-grade fantasy series. Past works include the Otherworld urban fantasy series, the Cainsville gothic mystery series, the Nadia Stafford thriller trilogy, the Darkest Powers & Darkness Rising teen paranormal series and the Age of Legends teen fantasy series.

Drew Murray is a native of Ontario, Canada. After a corporate career in technology, he has transitioned into education and writing. He's an avid fan of Comic Cons, escape rooms, and board games, which positions him well as the author of Broken Genius, his debut novel. Drew lives with his family in London, Ontario.

For Will Parker, it’s about personal redemption after a disastrous mistake

In 2011, Will Parker, the young prodigy CEO of a big tech company makes a coding mistake that costs a college student her life.

Every Step She Takes (Paperback)

Genevieve has secrets that no one knows. In Rome she can be whoever she wants to be. Her neighbors aren't nosy; her Italian is passable; the shopkeepers and restaurant owners now see her as a local, and they let her be. It's exactly what she wants.

Summer camp is a traditional teenage rite of passage, but when you add supernatural powers to the typically high dosage of adolescent hormones - you get an even more combustible mix. Sixteen-year-old werewolf twins Kate and Logan Danvers are none too thrilled at being shipped off to a supernatural youth leadership conference in West Virginia.

For Kate and Logan Danvers, sixteen-year-old twins of the werewolf Alpha, nothing could ruin a summer faster than the words "supernatural teen leadership conference." They expected a boring week of earnest political discussions and team-building exercises.

The exciting second book in the fantastical series for ages 10-14 by NYT bestselling author, Kelley Armstrong.

Monster hunting isn't for the faint of heart -- the first in a brand-new middle-grade series by NYT bestselling author, Kelley Armstrong.

In #1 New York Times bestseller Kelley Armstrong's latest thriller, the hidden town of Rockton is about to face a challenge none of them saw coming: a baby.

Casey Duncan is a homicide detective with a secret: when she was in college, she killed a man. She was never caught, but he was the grandson of a mobster and she knows that someday this crime will catch up to her. Casey's best friend, Diana, is on the run from a violent, abusive ex-husband.