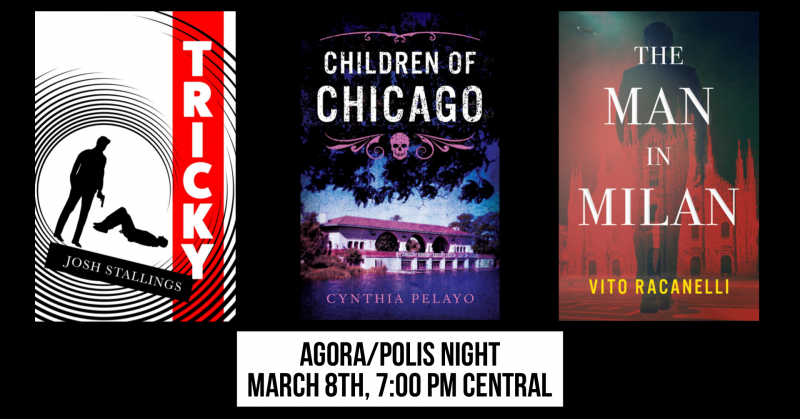 CHANTELLE AIMÉE OSMAN is the editor of Agora, an imprint of Polis Books, which focuses on crime fiction with unique social and cultural themes. Books she has edited have been nominated for multiple Edgar, Anthony, Lefty, Macavity and Strand Critics awards. The former editor in chief of RT Book Reviews Magazine and a freelance editor for over ten years, she is also an instructor at the Virginia G. Piper Center for Creative Writing, Authors at Large and LitReactor. Chantelle is the author of the non-fiction series on writing The Quick and Dirty Guides To… and has also published numerous works of short fiction, in addition to serving as editor for several anthologies, including Jewish Noir Vol. 2 from PM Press and Mystery ! from Down & Out Books. She was named a Publishers Weekly Rising Star honoree in 2020, and a guest of honor at Left Coast Crime in 2016. Find her online at chantelleaimee.com and on Twitter @SuspenseSiren.

Josh Stallings' Moses McGuire trilogy found itself on over fourteen best of the year lists, and YOUNG AMERICANS, a standalone, was nominated for the Lefty and Anthony awards. His short fiction has appeared in Beat To A Pulp, Protectors Anthology 1 and 2, Blood and Tacos, Crime Factory, and Muder-A-Go-Go. Born in Los Angeles, and raised by counter-culture activists (and sometime Quakers) in Northern California, he grew up undiagnosed dyslexic and spent some time as a petty criminal and failed actor before becoming a movie trailer editor. He, his wife, and various four legged fiends now live in the San Jacinto mountains. His latest novel, TRICKY, was written in honor of his son, Dylan, who is intellectually disabled. Website: http: //joshstallings.com/ Twitter @Josh_Stalling

Cynthia "Cina" Pelayo is the author of LOTERIA, SANTA MUERTE, THE MISSING, and POEMS OF MY NIGHT, all of which have been nominated for International Latino Book Awards. POEMS OF MY NIGHT was also nominated for an Elgin Award, as well as a contributor to the critically-acclaimed anthologies BOTH SIDES and LOCKDOWN. She holds a Bachelor of Arts in Journalism, a Master of Science in Marketing, a Master of Fine Arts in Writing, and is a Doctoral Candidate in Business Psychology. Cina was raised in inner city Chicago, where she lives with her husband and children. Find her online at www.cinapelayo.com and on Twitter @cinapelayo

Vito Racanelli's short stories have appeared in numerous publications, including the Akashic Books' "Mondays Are Murder" series; the Boiler; the Literarian; Newtown Literary; KGB Bar Lit Magazine; Brilliantflashfiction.com; Dark Corners; a "great weather for Media" short story collection, and River and South Review. His works have also been performed at Liar's League NYC and broadcast by BBC4, as part of its Sunday afternoon story series. His "A Trip to the Trees Place, was nominated for a Pushcart Prize. He was a 2013 and 2018 Fish Publishing Flash Fiction Story Prize finalist, placed a "notable" story in the Gemini 2016 Short Story contest, and was participant in the 2013 Pen World Festival. Vito's non-fiction has appeared in The Wall Street Journal, The Newark Star Ledger, and San Francisco Chronicle, and the Far Eastern Economic Review, among other newspapers. He is a Barron's Staff Writer, and is regularly interviewed by U.S. and European TV and radio programs such as WABC, BBC, and CNBC. He was the Associated Press-Dow Jones News Bureau Chief, in Italy 2/94-10/9, and led the bureau's wide range of coverage of Italian financial markets and news.

ONE OF THE MOST ANTICIPATED CRIME BOOKS OF 2021.--CRIMEREADS

ONE OF THE 10 BEST HORROR NOVELS OF 2021--LIBRARY JOURNAL

The Man in Milan (Hardcover)

For fans of Daniel Silva and David Baldacci comes a gripping thriller based on real world events that will have you riveted until the final page is turned. When NYPD detectives Paul Rossi and Hamilton P.