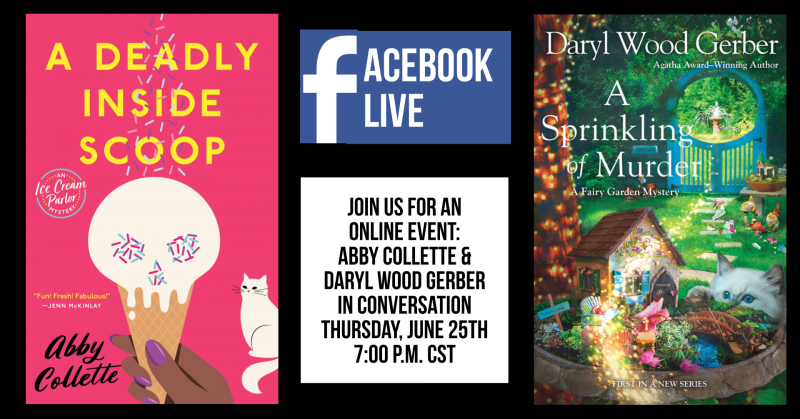 Wall Street Journal Bestselling Author Abby Collette loves a good mystery. Born and raised in Cleveland, it's even a mystery to her why she has yet to move to a warmer place. Author of the two Southern cozy mystery series Logan Dickerson Mysteries featuring a second-generation archaeologist and a nonagenarian who is always digging up trouble, and the Romaine Wilder Mysteries, set in East Texas, it pairs a medical examiner and her feisty auntie who owns a funeral home and is always ready to solve a whodunnit. Abby spends her time writing, facilitating writing workshops at local libraries and spending time with her grandchildren, each of which are her favorite.

Agatha Award-winning Daryl Wood Gerber writes the French Bistro Mysteries as well as the nationally bestselling Cookbook Nook Mysteries. As Avery Aames, she pens the popular Cheese Shop Mysteries. Daryl also writes stand-alone suspense, which include the titles Day of Secrets and Girl on the Run. Fun tidbit: as an actress, Daryl appeared in Murder, She Wrote. She loves to cook, and she has a frisky Goldendoodle named Sparky who keeps her in line!

A Deadly Inside Scoop (An Ice Cream Parlor Mystery #1) (Paperback)

This book kicks off a charming cozy mystery series set in an ice cream shop—with a fabulous cast of quirky characters.

A Sprinkling of Murder (A Fairy Garden Mystery #1) (Paperback)

Fairy garden store owner Courtney Kelly believes in inviting magic into your life. But when uninvited trouble enters her shop, she’ll need more than a sprinkling of her imagination to solve a murder . . .